I can’t remember what started my love for vampires. Long before reading Bram Stoker there were handfuls of Dracula candy, The Little Vampire, and Christopher Lee, tall, dark and handsome, revived with drops of fresh blood in Prince of Darkness. As a child, I used to repeat the word Dracula, emphasising the third syllable stress, DRA-cu-la, wondering where the name came from and what made it so terrifying.

This February I was cranky and bored after a string of cold, damp and grey days. I’d normally have travelled back home for some sunshine, but I was in need of the kind of excitement one can only get from discovering a new place. So on impulse I booked tickets to fly to Cluj-Napoca, the capital of Transylvania, and high-fived my six-year-old self.

When it comes to travel, I’m definitely an obsessive planner. I want to see everything, so my travel guides are heavily bookmarked and underlined before I even book my accommodation. For this trip I used this one, which focuses on the region, rather than the whole country. It doesn’t have the beautiful graphics of the Eyewitness Travel Guides, but it does the trick.

We planned our visit to Transylvania like we plan most of our trips: searching for history, folklore, and atmosphere. These were my favourite sights:

1. Sighisoara: where Vlad was born

Sighisoara is the birthplace of Vlad Tepes, a UNESCO World Heritage Site, and probably the place I felt most curious about. As soon as we were out of the airport we drove down there, and after three hours we reached our hotel. Snow speckled the red roofs and the evening was what I’d have called in England dark and miserable. Atmospheric, I decided, putting on my woolly gloves before we went out to find a place to eat.

We had the first of many meals of pork stew with paprika, polenta and cabbage. Not exactly sophisticated, but definitely warming. It was late when we finished, we’d barely had any sleep and we’d been travelling for over 24 hours, but the food and the thought of the medieval citadel under the full moon revived us. We walked through the cobbled streets and reached the heart of the town, the 14th century clock tower inhabited by a magnificent collection of automata. Some of them come out every hour for a short parade over the heads of the visitors, but the rest, beautiful wooden gods crowned by alchemical symbols, live at the top of the tower, and if you dare climb all the stairs you can press your nose against the protective glass, almost aching to learn their secrets. 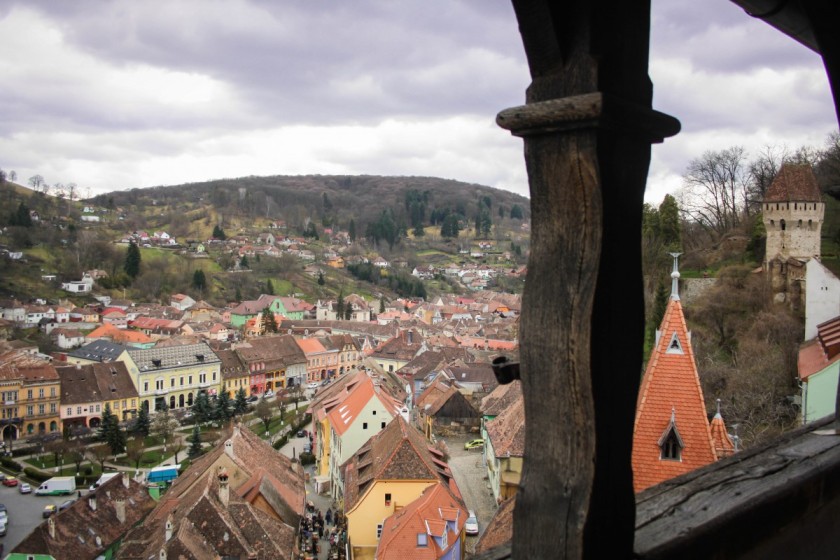 Views of Sighisoara from the clock tower

In one of the houses by the clock tower, a golden dragon hangs from a sign, an unusually Baroque sight in town. The sign is the mark of the house where Vlad Draculea, the son of the dragon, or Vlad Tepes, was born. Sadly, there’s nothing left there. It’s been turned into a restaurant, and the attraction advertised by the owners (“Visit the room where Dracula was born!”) is only a stage show with organ music and a caped man sleeping in a coffin, happy to sit up and pose for a photograph.

The following morning we climbed the 17th century Scholar’s Stairs to the church and walked around the Saxon graveyard that overlooks the town.

Surprisingly, apart from the bust in one of the central squares and the plaque near his house, it’s hard to find any other references to Sighisoara’s most famous son, but his features appear in the garish Dracula magnets and mugs sold in the tourist shops.

Our next destination was Viscri, a Romani village famous for its unusual fortified church. The friendly Roma sell handknitted socks in the cobbled main street that goes up to the church. From the top of the hill the views are stunning: the unique circular building of whitewashed walls and pointed red roofs to one side, the peaceful village and the valley to the other. The collection of traditional items and the inscriptions on the wall are haunting.

3. Driving below the Carpathians

I’m a sucker for road trips, especially if you have the right soundtrack for them.  I was secretly hoping that at some point we’d experience an updated version of Jonathan Harker’s journey through the Borgo Pass:

“(…) At last we saw before us the Pass opening out on the eastern side. There were dark, rolling clouds overhead, and in the air the heavy, oppressive sense of thunder. It seemed as though the mountain range had separated two atmospheres, and that now we had got into the thunderous one. (…) Each moment I expected to see the glare of lamps through the blackness; but all was dark.”

…And even though there were dark, rolling clouds overhead, the scene was nothing like this. But the drive below the Carpathians towards Bran Castle, all potholes, muted colours and rural scenes, culminating in the sight of Bran under the full moon, was the most beautiful part of the road trip. 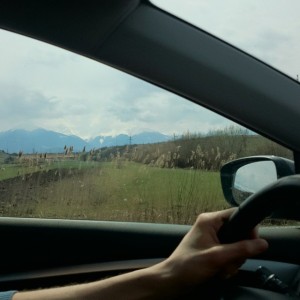 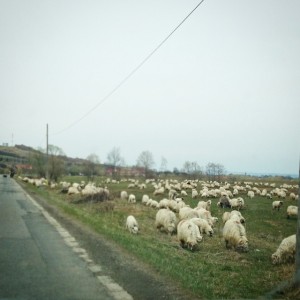 I kept thinking of the Ottoman army band we’d seen at Topkapi Palace in Istanbul only a few months before, and I found myself humming their chants. The raw energy, the colours of their uniforms, the exotic edge in their melodies, must have been both mesmerising and terrifying to the locals.

Bran Castle has tenuous links with Vlad Tepes but a well-deserved reputation for atmosphere. From the distance, it looks imposing, but the closer you come, the more spellbinding it is. The stairs were my favourite part: the steep ones that lead to the entrance, where it’s impossible not to imagine Max Shreck or Bela Lugosi holding a candle, staring in sinister silence or mellifluously saying “I bid you welcome”; but also the so-called secret stairs, a narrow, dark and steep passage that paradoxically seems to be the only way of accessing the first floor, unless you deviate from the official route. And even though it made me feel unwell (I still feel queasy now, as I type this), I spent some time nosing about the comprehensive collection of real torture instruments, including an iron maiden. 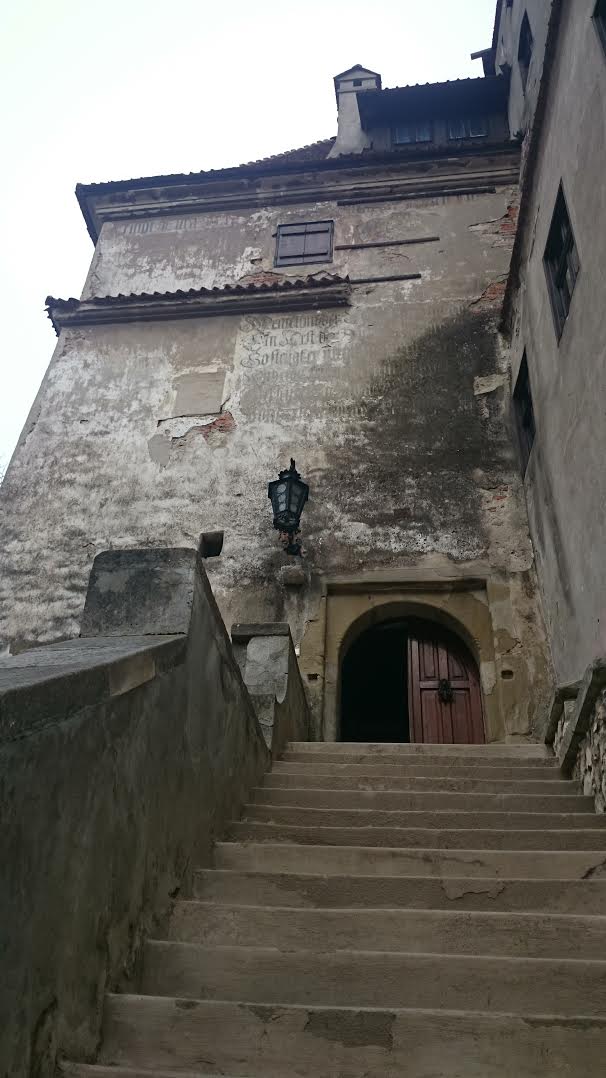 The stairs and entrance to Bran Castle

Oh, and don’t believe what they tell you: Corvin Castle isn’t the most impressive castle in Romania. Bran definitely wins.

I think it was the houses with eyes that won me to start off with. Later, the afternoon was so cold and rainy that we didn’t want to wander around for any longer, so we headed to the Brukenthal Museum. We loved the gorgeous Baroque interiors and the Art and Curiosity Cabinet with works of Csaba Zemlényi, but we found a gem in the basement: the Gothic exhibition that explores the origins and evolution of the movement, using the dimly-lit labyrinthine vaults as its frame, populating them with vampires, doppelgangers, mad scientists, and witches.

It was in Sibiu that we indulged in freshly-baked vanilla covrigi, similar to pretzels, before we managed to find a table in the busy cellar of Crama Sibiul Vechi and tried as many variations of pork, cabbage, polenta and pickles as we possibly could.

In popular culture, Transylvania is an amalgam of gothic conventions on a high mountain setting, a region where supernatural creatures and magical gypsies roam freely. But, despite Father Calmet’s treatise and the lure of Vlad Tepes, vampire lore seems more alive in England. Transylvania, remote and mysterious, may be where the legend originated, but it is in Whitby, the place that inspired Stoker, where we feel his gaze –where we conjure the Count.